- It was glorious and sunny by the time we started.

- The water was not as cold as normal. In my wave I believe Jimmy was first out of the water and I was 5th for the 40+ wave. I warmed up doing butterfly for a bit; this helped a lot - no hypoxia.

- Heading out to the run, I was amazed to leave T2 ahead of frickin Mark Petrofesa.He passed me within 1/4 of a mile. But I resolved to not let the rubber band get too long. I'll be damned but I was able to catch back on to him and, using all the patience I have, actually sat behind him for a while, letting him set the pace. Of course I got fidgety and decided to go around him - dumb move b/c we weren't even 1/2 way done. However the tactic did seem to work to take the wind out of his sails. The run back was excruciating. I was expecting him to catch back up at any moment. In the end I got him by 12 seconds. My avg pace was 6:57 but it felt like 6 pace! Getting old sucks!

- In the end, got 1st AG (16 overall) followed by Mark and then my buddy Gunnar Roll from Santa Cruz. 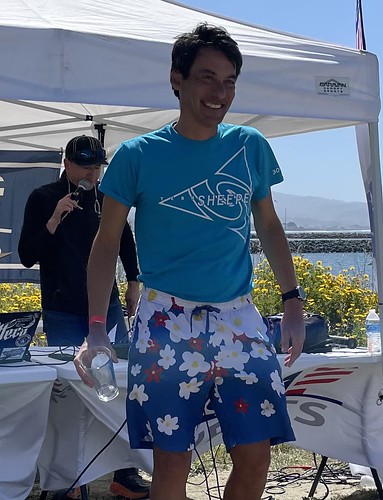 Recap: On Saturday Chang and I went to packet pick up in Half Moon Bay. It was foggy, windy, and cold. We were already freaked out by the rumoured cold water so, needless to say, our interest level was fading fast. Chang stayed at our house that night instead of having to drive from Hollister.

Race day morning we left by 5:45AM. Traffic was already backed up in HMB. We waited for what seemed like an eternity to park getting more and more stressed by the second. There was no more parking! Fortunately we were able to use an over flow lot which was much closer to transition. When I got the bike out of the car, the handlebars had been turned 30 degrees; loose headset! F! I was totally preoccuppied with that and worried I would crash on the bike. No way to fix it, I just adjusted the bars back.

Fortunately the sun came out on Sunday and it was spectacular. Though the water was very cold; Jim Silk (who got up at 3:30 to volunteer!)said it was 50.5 degrees and another said 52. It was so cold, they shortened the Olympic distance to 3/4 of a mile. And the water was indeed bracing on the face. I came out in 10th place but Chang was only 13 seconds behind! His swimming has vastly improved.

Biking on hwy 1 was fairly treacherous; there was a section with no shoulder that was jammed with people threading through it; I just went around using the highway. But I was constantly thinking about the loose headset. Fortunately it held up. I  had the third fastest bike split but Chang was right behind me, just 12 seconds back.

Coming in to T2 some other guy ran in to me and scraped up my knee adding more drama. Dave Campbell had done the aquathon and was giving me and Chang crap for being too slow in T2; I couldn't get my frickin shoes on because my feet were cold and the Nike Next % Vaporflys aren't really meant for quick transition.

I managed to leave T2 about 2 seconds before Chang but my "lead" was short lived Chang came around within the first 1/4 mile. F! Our coach, Tim Sheeper noted our battle as we ran past him. Yes, this would be a battle, not a leisurely run with my friend. My strategy was to just sit behind him and hope not to get dropped. But, naturally, I doubted myself and decided to put a surge in to see if I could drop and deflate Chang. That last about 100 yards. Chang came right back. We ran together until about 2.75 miles when Chang dropped the hammer. He finished mile 3 at 6:32 pace; I could only muster 6:44 pace. In the end Chang got me by 13 seconds, 1st in his age group and 7th overall. I was 1st/8th. We were 10th and 11th fastest run splits as well.

Other members of the 50+ group had an outstaning day as well. Thornton and Andrew won their AGs in the Olympic Distance. Dave Campbell was second overall in the Oly Aquathon with a blazing 39:19 10k! Team Sheeper also cleaned up with at least 13 athletes participating including 7 first places! 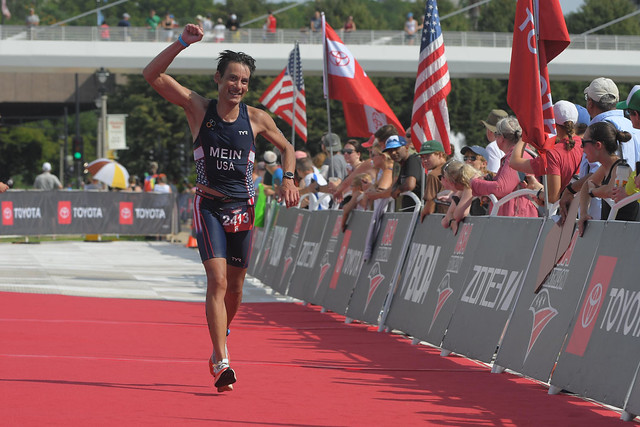 My coach, Tim pointed out the importance of consistency.
- Consistent in training. I have not been consistent this year, esp with running. I thought I could qualify for Worlds primarily based on knowing the race mentally. To be frank, I didn't put the work in.
- Consistent in pace on the swim. In the race, I freaked out when I saw how far away the last buoy was. I should have just kept going but it was overwhelming.
- Consistent in pace with the bike. My bike was pretty good - 8th in the AG. But I got fixated on chasing and lost my rhythm. Burned too many matches by trying to accelerate too hard. Lost to a guy who I was ahead of.
-Consistent in pace with the run. First few miles were ok. Then, around mile 4, an age group competitor came up and I tried to hang with him; blew up and then lost more time trying to recover. I think I lost another place in the process.
- Consistent in life. I have been somewhat herky-jerky with career and family this past year and it is showing.

Bottom line: I have not been consistent and the race results bear this out. It is a big wake up call.

I am not that disappointed in me "as an athlete" but am NOW more focused on "being consistent" with the things I do from family to work to athletics and other pursuits.

What is really cool about racing Tri's is it creates a remarkable meditation on mental and physical health and ability. It is such a unique level-set (that most people don't experience). It is such an incredibly awesome way to take mental/physical/spiritual inventory. To you point, racing more frequently may help to level-set more frequently which should translate to better quality of life.