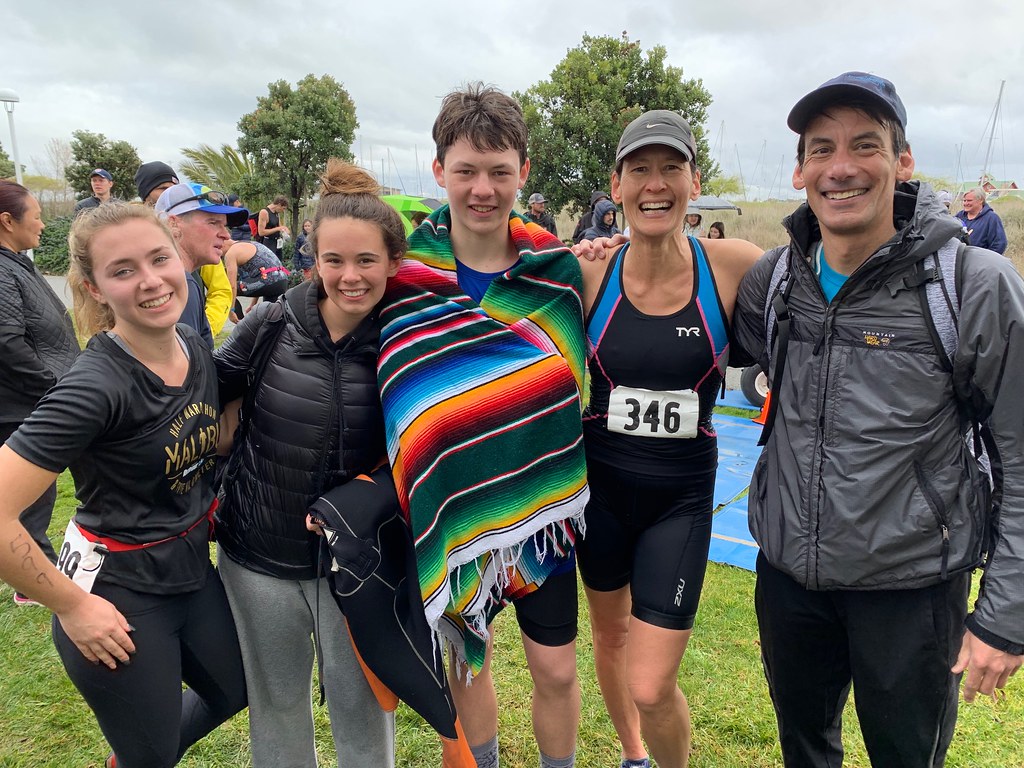 Really missed you guys out there today; it was weird, though, no familiar faces. Just Barry Phelps (who got 2nd overall last year and first AG for us 50 year olds - I racked next to him right by the run exit) and Martin Spierings (he's Gunnar's tri coach from Santa Cruz; really good swimmer and 43 years old). My sister Sinda was doing it and my daughter Lily was doing the relay with her nephew Finn - Sinda's son (bike) and Lily's friend Martina (run).
Weather was pretty good at first; a little rain on the drive over then it seemed to warm up and was humid.
They announced, tho, that the water temp was 54 degrees, holy shit!
Barry looked pretty damned nervous at the swim start and said "this is the last time i am going to do this race - too damn cold!".
I waited till the bitter end to get in; wow, the water was cold going down your back and on your face, F!
Finally, gun goes off. The good news about the cold - you felt like swimming faster to get warm. There are two left turns marked by buoys.

I kept fighting with the dude next to me to get position. Made the first turn. Then the second buoy seemed way the F far to the right. So I swam to the left because it was more direct.
Looked up, shit, no one is near me. Uh oh, I might get DQ'd for cutting the course I finally thought. Cut back (F!) to make the buoy. That was a crucial mistake; I wasted a bunch of time doing that.

Finally put the speed down on the straightaway and caught one guy. Popped up on the deck like a wounded seal and ran back to T1. But my fing watch didn't record it.
You know how you fixate on shit like that. Totally fiddling with the watch the whole run back, barely had time to take the wet suit down. Got to T1 as Barry was leaving (12:21 vs my 13:06 and 1:19 vs 1:38 T1).

Stupid idiot that I am I was thinking "I gotta get the Strava times!" (Mark, you are to blame!) so I fiddled with it to get the watch in to bike mode. My expectations on the bike were minimal; haven't been riding much. But was surprised to be going 25mph on the way out. On the way back, a bit of head wind. And...some kid passed me on the return lap! Holy shit, WTF? Only Barry and Derrill have passed me on the bike in years past.

Otherwise the course wasn't too bad; only yelled "on your left!" a few times. Enjoyed seeing my nephew riding his Mtn bike and my sister as well.
4th lap, though, it started raining - hard. It actually was a bit nerve-wracking and slightly overwhelming. Finally hit T2 and reset my watch to go back to Run mode (loosing time to do it of course). Everything in T2 was wet. The rain was still heavy. Ran out and for the first 1/2 mile thought, wow, I'm actually getting kind of cold. Barely broke 7 min pace for the first mile, running through a few puddles. I resolved to just finish the thing "21 mins is ok" I thought. Plus I haven't been running much with my new job. Then the rain let up and I was getting in to the groove. Suddenly there is a pitter patter of steps right on my ass. So I speed up. At the turn around, there's this dude who looks about my age. "How old are you?" I say. "Just turned 50" he says with an accent. F! He then proceeds to introduce himself - Doug Woods, a Kiwi. I tell him I am 50+ too and plan on tripping or pushing him with a laugh. We bring the pace down to 6:35 then 6:30 then 6:20. F, it hurts so GD much. Finally he gapped me; got me by 11 seconds.

In the end, Barry kicked ass with 1st AG and 3rd overall. Martin kicked my ass going 2 mins faster in the swim, out-transitioning me and with a faster run split for 2nd in his Ag and 6th overall. I got 3rd AG/11th overall.
My sister was first AG. Daughter Lily was 3rd fastest in her swim wave (all women and all relays) for the swim and put 1 min in to me. Their mixed relay was 2nd.
Pretty satisfactory day on balance. At least I got 3rd, unlike last year which was 4th but with a faster time! 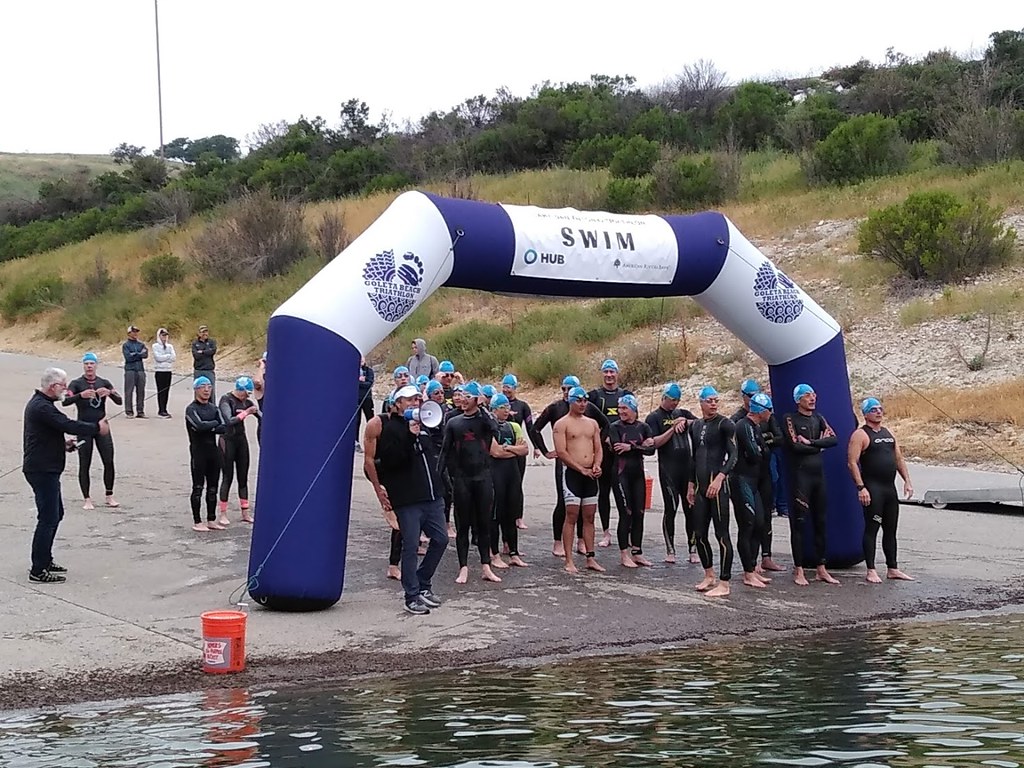 Race cancelled then put on by Goleta Tri Club. Less than 120 participants. Park was empty. Still a great time.

10th out of water including 3 Aquabike racers. Got to 7th on bike then 4th Olympic on run. Very cold swim; wore jacket on bike. 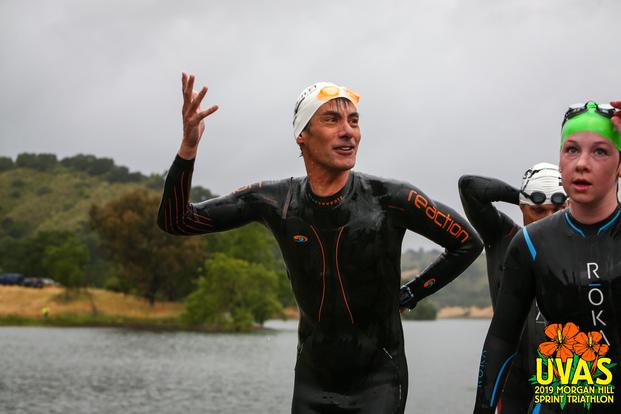 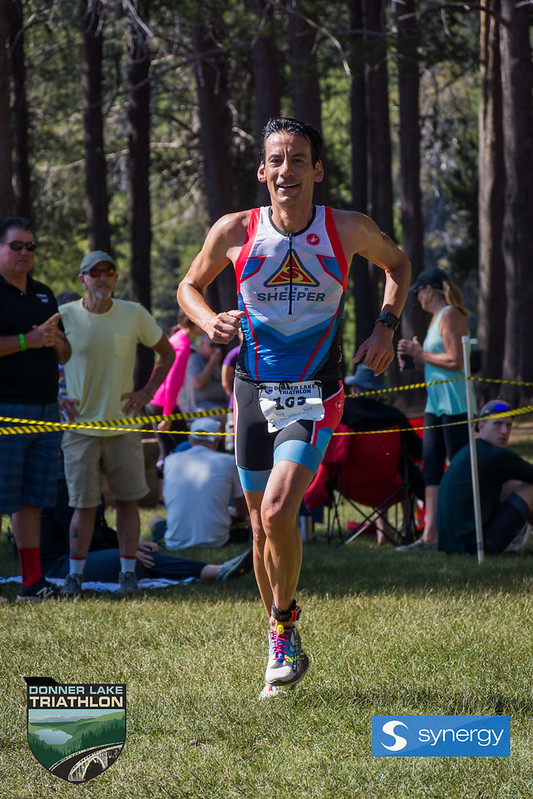 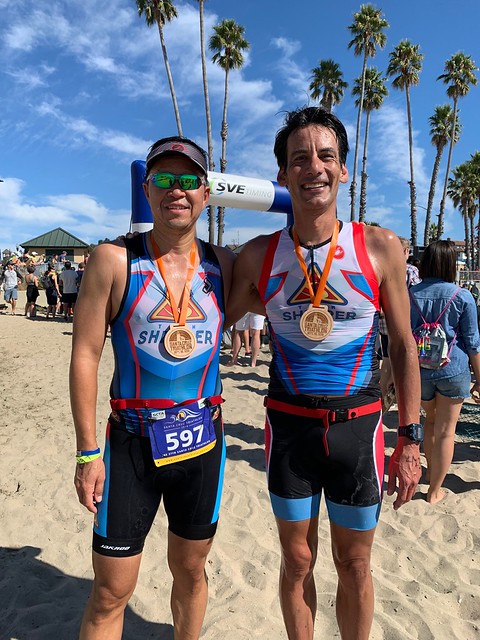 Spectacular weather; 80 degrees and flat water the Friday we got there. 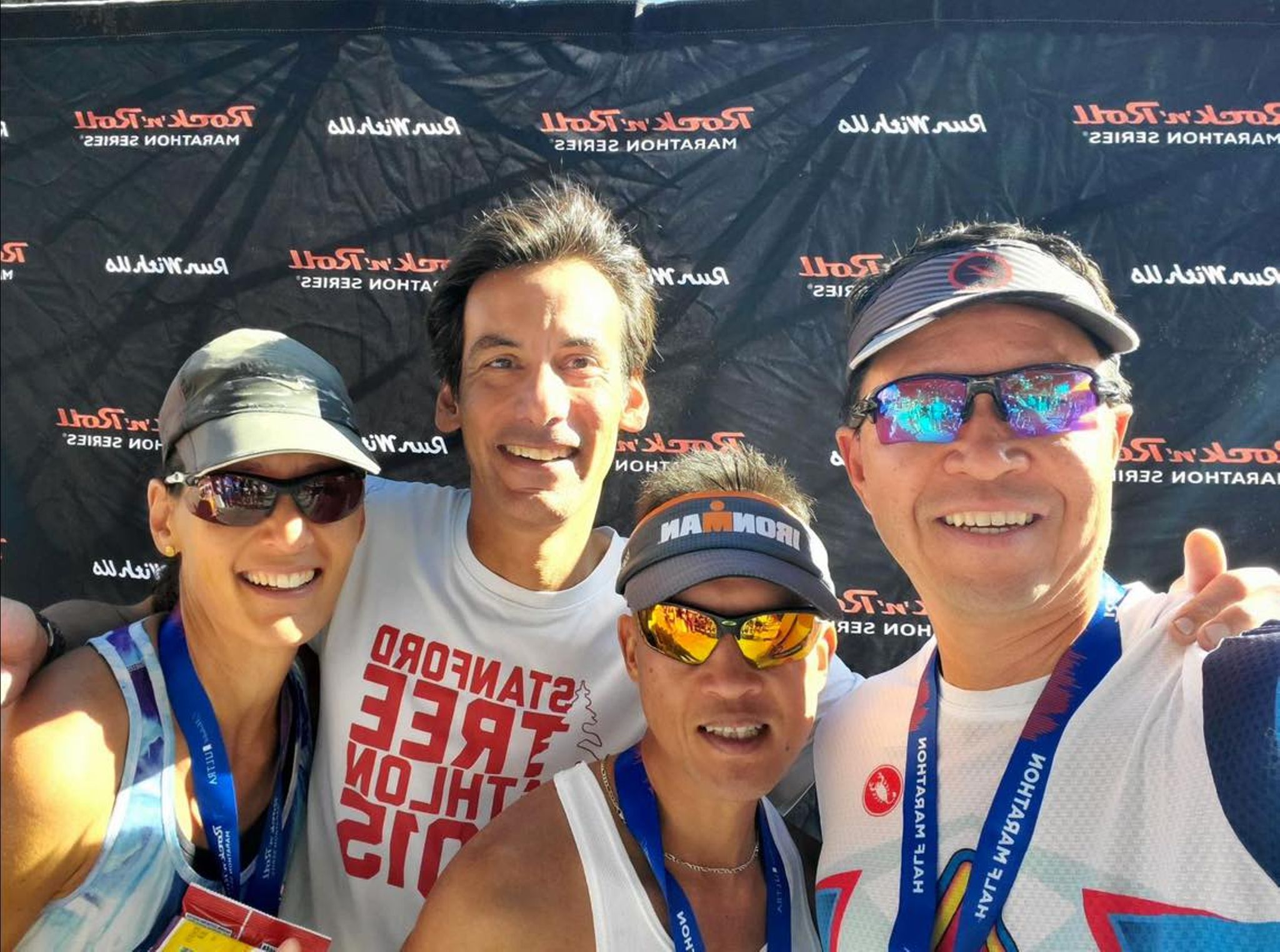 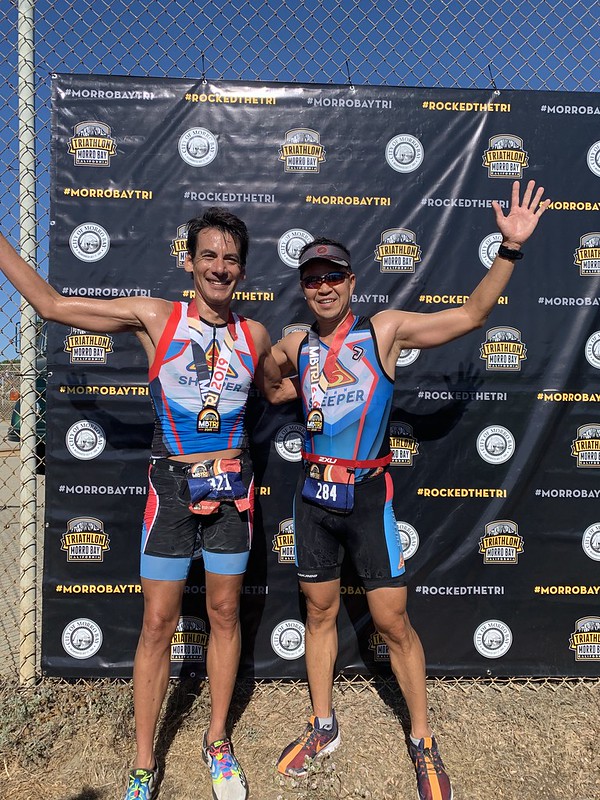 D, should have listened to you years ago. Morro Bay tri turned out to be one of the highlight vacations for our family all year. The surrounding area is just spectacular; I can see why you might want to retire there. Man, the weather on Saturday was just remarkable; 84 degrees in spots! The race location, just phenomenal.
On to race day - Nanc dropped me off and it wasn't too bad finding a place to rack. It was good to finally introduce coach Derrill to coach Tim in the morning as well. I was pretty excited to use the new wetsuit, too.
Chang and I got to the front of the swim pack, Chang up a few more rows (key thing!). Wow when we took off swimming, that was a total free-for-all. I tried to be patient and not get kicked too much. Lo and behold, Chang was battling it out up front and I didn't get by him until past the first buoy. Things finally opened up but it looked like there were a bunch of swimmers way ahead. I was sort of deflated thinking how the F can they be so much faster. When we got out to do lap 2, Derrill said "You're top 10!". That was a key and huge boost of confidence. I dove back in and followed another guy. We went way right and swam through the seaweed. It was a more direct line but likely slower. Coming back home I tried to push the pace. Came out of the water in 15:59 thrilled though the course was likely short. Tore out of T1 and Tim said "you're in 6th place".
I took my time getting up to speed on the bike but, in so doing, got passed by Stephano Profumo (who went on to 3rd overall). He wasn't in my AG, so ok. Then we got out on Hwy 1. The head and crosswinds were unsettling but manageable. Then it got scary. I had made a dumb gear decision as well. My BMC tri bike has a 50mm and 60mm front aero wheel. The 50 is significantly better in cross winds than the 60 so I use it in most cases. Well for the new Parlee I decided to get a 60 front wheel. Dumbass. I should have listened to my own experience and got something less aggressive and better able to handle cross winds.
In any case there were a few times when I thought I would literally get blown over so I just shut it down. Sat up and rode the base bars; at this point I just wanted to finish safely. My heart rate was just 152 avg for the whole thing. Some monster blew by me seemingly unaffected by the wind before the 1/2 way mark. Shit, from 6 to 8th place now. At the turn around I resolved to refocus. Especially since Chang appeared not soon after! Holy cow, Chang was racing while I was surviving. The wind wasn't as gusty on the way back though there was a stiffer headwind. Coming back in to town I actually caught one guy so back to 7th place.
(To this point I had a 2:31 swim + 8 sec T1 advantage on Chang.
On the bike he clawed back 45 seconds plus 16 more in T2. So he was down just 1:30 heading out to the run.)
In T2 I bent at an awkward angle to rack my bike then swung down to pull on my shoes. *Bang*, threw out my back. I gimped out of T2 like there was a rod in my butt. I honestly thought about DNFing right there. But I saw Nancy and the kids; Lily said "Chang is 2 minutes behind".
I was able to hold 7:30 pace but no faster as my back was now pulling on my hamstring which then aggravated the still unhealed right Achilles. Ugh. Trying to calculate - 2minute lead. There is no fing way Chang won't catch me. He'd be able to go 6:40 or 7 pace.
The only prayer I had was that he'd find the course similarly challenging and that would somehow slow him down. Mile 3 on the road I tried to increase pace but could only muster 7:12. Like a shark coming for it's prey as we turned on toward the beach, Chang came pounding toward me then just "went around" as I gingerly went down the steps.
On the hard pack sand Chang didn't increase his pace that much. Ah maybe the cagey veteran can just hang with him and somehow outsprint at the end I thought.
Suddenly Tim appeared on his bike. He gave me some words of encouragement (relax! refocus! loosen your shoulders! just let it flow). He then scooted up to Chang and must have dropped what amounted to mental steroids because Chang just fing took off! To be honest, BroSo, I didn't even see you run that last portion up the beach, you were that far ahead.
It was remarkable to see you just keep extending until...you were gone.
In the end Chang ran 3 1/2 mins faster - 7 pace vs my 7:38 and got me by 2:06.
It looks like Chang should have got a podium spot as well as it looks like you are 3rd AG/8th overall.
I should have been 2nd AG but for some reason they didn't include the monster who blew by me in the results so I got 1st AG.