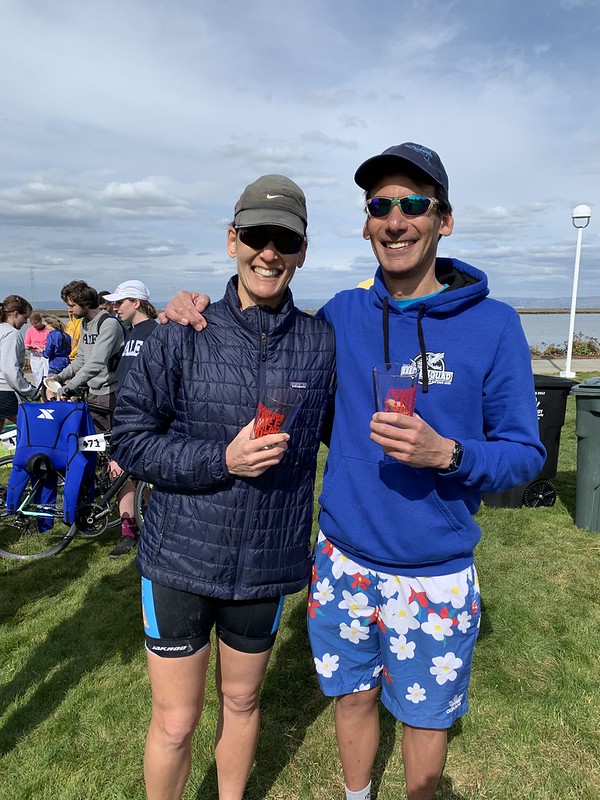 Here is something really cool that one of my buds from yesterday, Dean Woerner (55 AG) said:
"There is something about racing that makes you feel like you’re living your very best life and we are all so lucky."
Doesn't that nail the spirit of triathlon?! It's kind of absurd to place all of this praise on a dinky little sprint tri but I think it's true.
-------
The Treeathlon is such an absurdly "important" race because it's the first of the season, the weather is always unpredictable, the swim is challenging, the bike is way too dangerous, and you never know who is going to show up. It's also the one local race where a lot of the "50+" crowd shows up. And similar to you, I also had a new wet suit and new bike. In a sprint distance, equipment and transitions really make a difference.
I was psyched to see D (and Mary), Dave Campbell (and his wife), Dean, my sister, and NZ newbie Doug Woods, a youngster at 51. Doug beat me by 11 seconds last year though I got revenge on him at Donner and Santa Cruz later. A bonus was Gary showed up to take pics and hang with us; awesome! This said, my head was not into it at all and really had no desire to race. Of course I also had excuses; I had done a quick for me 5 mile run on pavement the previous Thursday and my calves still felt shredded from it. Lame I know but, of course, it was all I could think of. And going in to this, I didn't really have "peak" bike or run fitness though I'd been swimming a lot and last weekend did this ridiculous 5 mile swim as part of a team event so at least I felt confident for the swim portion.
In any case, on to the swim. We were the second to last wave to go off; 40+ men. The water was 59 degrees, much better than years past. Like Derrill, I have the new Roka Maverick wet suit. That thing is magic; I don't normally think wet suits make that much of a difference, but this one is incredible (2 mins faster in the pool for a mile vs without wet suit).
The gun went off and I could see Dean sprinting ahead to the first buoy. Damn, that guy is amazing in open water. I fixated on him and tried to follow. I did feel someone hitting me (I guess it was D!) but kept going. After the turn, suddenly, it wasn't crowded any more. I looked up and saw ~6 swimmers ahead. Kept running in to the next guy so I went to the right, closer to the docks. Tried to calm down and do longer strokes. Then there were just 3 of us. Wow, that was exhilarating to be in the lead swim pack; haven't felt that ever before. The first two guys went for the swim ladder so I went to the dock. I was exhausted (156 avg heart rate) and couldn't lift my arms - so I just sort of flipped up like a seal and finally got to my feet. Ran in to transition in 2nd place overall for the wave. Left T1 and took 1st place within 30 seconds.
On to the bike. Wow, it felt pretty cool to sort of be "in first place" of the wave. That said I didn't have the training base to really put the pressure down on the bike. The bike (Parlee) is also relatively new; it's an amazing bike with disc brakes and an incredible ride quality. That said it seems to respond better to higher speed and mashing a slightly lower cadence than my old bike. Unlike the swim, I simply didn't have the conditioning and confidence to really push it. And, of course, my head wandered. I was in no-man's land out in front. After the first turn around, though, holy shit, Derrill was "right there"! Oops, maybe I slacked a bit!
Then on the start of the second loop, shit, Doug was even closer! That gave some motivation. I'll be damn, that bike felt better at 25mph then 23. And at 90RPM vs 100RPM. Finally made it to T2 where there was a long run with bike shoes on; I probably should have taken them off and run bare feet instead. Oh well.
On to the run. Calves still hurt and I have been doing zero speed work. That said it felt awesome to be "in first place" for our wave. Then it happened; clip-clopping coming up on me. Damned Doug was right there. We exchanged a few pleasantries and he said mile 1 was a little too fast, "around 6:20 pace". F! Then Doug just extended away. He went on to finish the run in 18:59, 6:07 pace (!!!) and took 1st place AG and 4th overall. I came in 51 seconds later (20:13 5k), 2nd AG and 5th overall.
It's so interesting to me how this little tiny sprint race is so impactful and oddly important. The best is when people you know show up; there is comfort in knowing you all and this small circle of like minded people who know what it is like to suffer and incrementally improve. And those that value and appreciate those experiences.
Cheers to those that continue to do this esoteric sport and appreciate how satisfying it can be.